This isn’t the next race but it’s different in that you need to let us know before this weekend if you want to do it! The club will pay for the entries but we need to know so we can sort numbers and timing chips. There will be no on the day entries. It’s a fantastic event that attracts additional runners from across the country. Please only advise if you can definitely run. Thank you.

The next Cross Country race takes place Saturday 9th November at Hynburn. If you are a registered club member do please come along, join in and represent the club. There is no selection criteria, just a club vest is required. The course is either spikes or trail shoes and is sure to have a little mud so likely to be good fun! For details of location, course maps and timings please look at http://www.midlancs.org.uk/

Just a week after the opening round of the Red Rose cross country season, Wigan Harriers were in action again in the first fixture of the Mid Lancs campaign on Saturday. 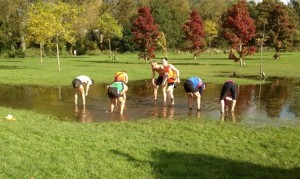 A boggy course greeted the runners at Towneley Park in Burnley at the weekend as heavy rain over the preceding days ensured heavy going. Several runners were later seen to be taking advantage of the many “ponds”, or big puddles that dotted the course to have an impromptu wash down after their events!

The Wigan Harriers Juniors were first out to test the bogs, with Matthew Baptista notching 8:13 for 20th places in the U11 boys. A fine showing in the U13 girls event saw Charlotte Newshall taking 10th place in 12:11, and Kim Baptista close behind in 15th place and 12:27. Nathan Dunn notched a superb 2nd place just 2 seconds away from outright victory in the U13 boys with a scorching 11:42. The U15 boys saw Henry Lucas home in 17:22 for 29th place.

A fixture clash and illness in the ranks looked to have jeopardised our chances of fielding a full strength mens’ team for the event, with Richie Noone considering a heroic appearance straight from his sick bed. A commendable act of self sacrifice from Darren Middleton ensured a minimum of 6 runners for the mens’ team as he abandoned his pre-paid entry into the Coniston Trail race to represent the club. 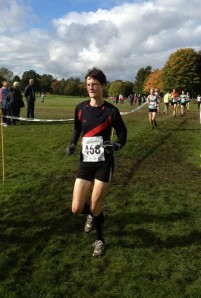 No such luck for the Ladies Team with long term injuries and marathon recoveries ruling out regular team members. The burden representing the club in the Ladies race thus fell to Tracey Dutton, returning to competitive action for the first time in some months since recovering from a persistent Glute problem. Despite not being anywhere near her usual prime racing condition Tracey notched a fabulous 22nd place overall to finish as 7th in her age Category with 27:32

As Tracey returned to the Gazebo the mens’ team headed out for Wigan Harriers first appearance in Division 2 of the League after winning promotion in style last year. New to the team for 2012 and making their x-country debut in the vest were Mark Glynn and Andy Kauffman with Chris Burgess making a welcome return to Mid Lancs after a few years away from Harriers. Completing the team were Darren Middleton, Andy Eccles and Barry Abram. 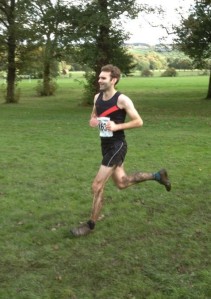 In the photographs of the event it is clear that Andy Kauffman had far too much fun for cross country as he ran with a relaxed smile on his face! Andy was unsure of his pacing ahead of the race and with the benefit of hindsight believes he had enough left in the tank at the end to have justified going harder on some of the earlier laps. That’s a remarkable statement after leading the team home in 36:50 and 22nd place overall.

Mark Glynn was next man home in 38:50 showing he hasn’t lost any pace in his marathon build up. His strong performance resulted in 42nd place overall and an impressive 10th V40. Mark promises great things if his cross country debut is any indication. Andy Eccles defied a niggling calf to grab 16th in the V50 category with some early season form. Andy usually improves as the season progresses so 41:38 for 78th place overall represents a promising start from which to launch his campaign. 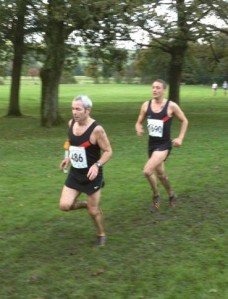 Chasing Andy down over the closing miles was Chris Burgess who was ideally placed to dodge the clods of mud thrown up by Andys distinctive “heel-flicking” running style. Chris pushed hard over the closing stages in an attempt to haul in the coach, but as fatigue slowed his own cadence he described Andys progress as like that of a “spring lamb”. Never one to wallow in praise Andy retorted that he felt more like “a stubborn old goat”! Chris made an early start in his preparations for the race by rising from his bed at 5 in the morning to begin a series of interval sprints… to the toilet. A badly timed dose of food poisoning had him gulping down the re-hydration salts before heading for Townley Park to compete. That does tend to make his 41:54 for 83rd place all the more impressive. 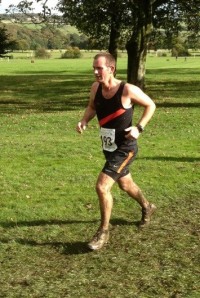 Next across the line was the Reaper himself Darren Middleton who had given up a 15k trail in the beautiful surroundings of Coniston to help out the team at picturesque Burnley. Darren is well and truly fired up for this season of cross country and his enthusiasm showed in a 42.30 for 96th place and 26th V40. He reports having thoroughly enjoyed every lap of the race except perhaps the final few yard from the finish line to the marshalls recording final placings. Darren had held out in a photo finish with 2 other runners tracking him down with sprint finishes. Unfortunately he wasn’t aware of the need to keep to finishing order in the funnel, and thus had his placing cheekily taken away on the walk-in: a bitter lesson learned! 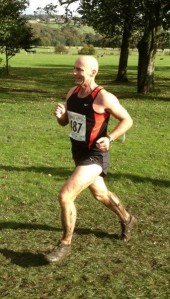 Crossing the line in the vital 6th man slot was Barry Abram ensuring that the efforts of the rest of the squad converted into team points in the league competition. Barrys run bagged 43:32 for a very respectable 27th V50 and 113th overall. Julie Platt may not have recovered in from her blistering Berlin Marathon effort to take part this week, but she was still on hand with her magic tin of goodies post-race. It has been reported that everyone enjoyed her muffins in the Gazebo afterwards.

The combined efforts of the mens team saw them finish in a fantastic 9th place from 26, with the Vets Team and even more commendable 7th from 26th.  This means that with one event gone Wigan Harriers top the table in Division 3, whilst lying 2nd in the V40 Division 2.

Next up for Mid Lancs is the big McCain UKA event at Liverpool Sefton Park on 24th November with everything to play for! 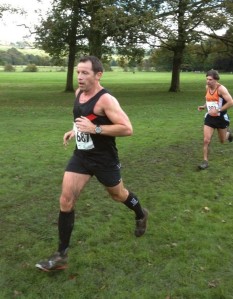