The cross country season got off to a flying start at Leigh Sports Village this weekend with the first fixture in the Red Rose League calendar. A total of 11 Senior Wigan Harriers turned out along with a further 9 juniors in a magnificent showing for the club. The rain finally gave it a rest and temepratures bordered on the downright mild as teams from across the region gathered to take on a fast, flat course.

The Harriers blue Gazebo made its first appearance of the year and kept the Senior Men busy for a good 15 minutes of organized haplesness as they shuffled around the field with a half built tent tryng to find shelter from the breeze. Only having 3 tent pegs left over from last season didn’t give great confidence that the gazebo would last the day. Fortunately Darren Middleton returned from a forgaing mission with a handful of extra pegs he had “borrowed” from around the venue. Darren again proved his blagging credentials in securing a set of safety pins for Mike Worsley who was contemplating how long spit and best intentions would hold his number to his vest.

Whilst the Senior Teams busied themselves with camping skills, Mathew Baptista was representing the club in fne style in the Boys Under 11 event. Mathew stormed home to 19th place in 6:34 to set the standard for the day. In the U11 girls race, Shona Taylors’ daughter Emily did her mum proud with an impressive 7:37 to secure 24th place.

Perhaps the result of the day went to Nathan Dunn who won the U13 boys event outright. Nathan ran a strong race to finish 9 seconds clear of the second place runner in 7:29. Well done Nathan. Kim Baptista and Alice Rowe took on the U13 girls race and both ran well. Kim came home in 6th place with an 8:38 run, and Alice was close behind in 9:01 and 13th place. Henry Lucas was our only runner in the highy competitive Boys U15 race and came home with a balanced 15:15 in 28th place. Rachel Sidebotham recorded a 16:18 in the corresponding girls U15 race for 18th place.

With the juniors having set the standard it was over to Jayne and Shona Taylor to follow suit for the Endurance Group in the Ladies race. Jayne put in a fine performance to come home in 21:58 and 18th overall amongst a very strong field. Her efforts secured 2nd place in her age category. Shona Taylor followed up her sterling performance in last weeks Relays at the same venue with a quality run for 70th place overall. Her 27:28 meant a fabulous 13th place in her category. 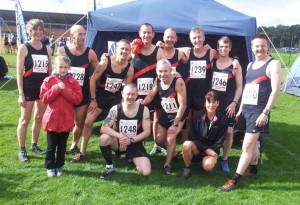 Upon returning to the Gazebo, Jayne helped to inform the raging debate amongst the mens team over Spikes or Trail shoes when she reported heavy going on the big lap out into the country. With that hot topic settled, discussion then switched to Andy Eccles disturbing undergarments, and the possible benefits of Viagra in a cross county context. Disappointingly Andys girdle / nappy turned out to be a back warmer, and apparently the only sporting benefits to Viagra are to un-nerve the opposition.

The stirring sight of 9 of Harriers finest Senior Men took to the field wearing the red and black vests with no small amount of collective pride. For once it was a steady start with Dave Collins and Andy Eccles leading the way round the first small lap before the 180 starters headed out on the first of 3 big laps. Chris Burgess worked his way through the field to lead the Harriers charge with Darren Middleton and Barry Abram formed a pair running as 4th and 5th Harriers.

As the course re-enters the main field the Wigan runners were releived to see the Gazebo still standing, before checking ahead to guage the distance to the next Harrier. A few performances were boosted with both the prospect of chasing down a fellow Harrier, along with the the prospect of being chase down by the Harrier behind!

The ground began to cut up on the second and third laps it became clear that those who had opted for full cross country spikes had the advantage ver those shod in trail shoes. The benefits of a trail shoe on the firmer gravel path sections were lost by the lack of grip across the soggy fields and thickening mud.

Chris gives blood for the cause, and shows us what happens if you dont wear socks!

The first 3 runners home for Wigan Harriers crossed he line within 50 seconds of each-other. Chris Burgess marked his return to cross country in style as first Harrier in 39:37 and 51st place overall. Hot on his heels was Dave Collins in 39:42 as 4th V50 and 57th overall. Just 40 seconds behind Dave was Andy Eccles in 66th place and 6th V50 in 40:22.Similarly, there was barely more than a minute covering the next 3 team members with Darren Middleton in 42:02 (87th), Barry Abrams chasing him down in 42:15, (90th), and final scoring member Richard Noone in 100th place in 43:10.Unable to bridge the gap for a scoring place was Graham Millington in 112th place, who was compensated by an unofficial PB over 10k in 43:58. Also notching his fastest time over the distance was Stuart holding in 44:27 and 119th place. Not only did Stuart run a fabulous race, he achieved his main target which was to stay stayed upright throughout!

As all true teams should, the Harriers gathered on the finish straight to cheer each of our runners home. This team loyalty was rewarded as cross country debutante Mike Worsley made his way up the final few hundred metres looking like he had given everything for the cause. Club mates cheered him on and began to shout their warnings as a runner came charging from behind to make a bid for Mikes place before the line. Mike seemed oblivious and the charging runner quickly closed the gap and looked a cert to overhaul the Harriers runner until Mike suddenly realized the danger, and did a passable impression of a scalded cat  for the comedy finish of the day and a 50 metre sprint to save his place.

Mike Worsley smashed his previous 10k time recorded at the Great North Run with a fantastic 46:47.

A fine team performance all round and a hugely enjoyable day out for those who took part.