A fantastic race report from one of our newer but very active members Caroline Brown.

My Manchester half experience nearly didn’t start at all… as despite thinking we had left in plenty of time (we clearly hadn’t) and having bought our car park ticket in advance, only useful if you are actually there in time… we decided after getting changed’ Houdini style’ in the car, that the only thing for it was to dump the car and run – all 2 miles to the start (a good warm up I admit) with my poorly friend Sandra in tow who was clearly suffering with a bad bout of flu. Arriving just as the gun was sounding and still needing to find a bush for the customary pre run wee, we decided to just join the back of the pack and set off in the lovely northern rain, after all the name of the game for me was to complete challenge 15 after the hectic week I had had, anything else would be a bonus.

After the heat of the Lisbon sun two weeks before, the rain was a welcome relief and reminder that autumn had well and truly arrived whilst I have been busy trotting round the globe for work. The support all the way round the ‘out and back’ route (see I am learning the terminology) was amazing and the lovely flat course helped to keep the jet lag at bay. My mind and body felt good and for the first time in ages I didn’t need to have a word with myself to keep my feet moving, I actually started thinking how lucky I was to have had the chance to run around the Formula 1 track in Abu Dhabi earlier that week and the amazing experiences and people I have met along this crazy, charity challenge journey.

At mile 5 I took my gel, swilled my mouth out with water and spat it out – yes me I SPAT!, once I would have thought it gross… well not anymore:) The advice and words of wisdom from my friends Bobby and Darren were ringing in my ears and keen not to repeat my recent mistakes at GNR and Lisbon I carried out their instructions to the letter. Amazing I hear Bobby say – she actually listened! At mile 8 I had a welcome shout out from some work colleagues and at mile 11, our very own Sarah Edwards and Ian Stewart were there having cycled all the way to Manchester to act as the Harriers cheering squad to encourage us all homewards.

Unable to see the watch due to the rain, I guessed I was somewhere under 1.50 having overtaken the pacer on route but pleasantly surprised to finish in 1.46.12, the fastest I have run since April – even if as Rachel Naylor and I saw from the text on my phone from Stuweb, I had according to them just completed the Erewash Triathlon in that time … which would have been an amazing achievement as I swim like Miss Daisy! Having rescued my poorly friend who had heroically managed to get round and seeing some of my fellow harriers after the finish, (having missed them at the start due to my late arrival!), I pondered on my soggy long walk back to the car that I felt so proud to be part of a club that saw so many people run PBS yesterday and that never fails to support each and every one of us all competing at different levels with individual goals. 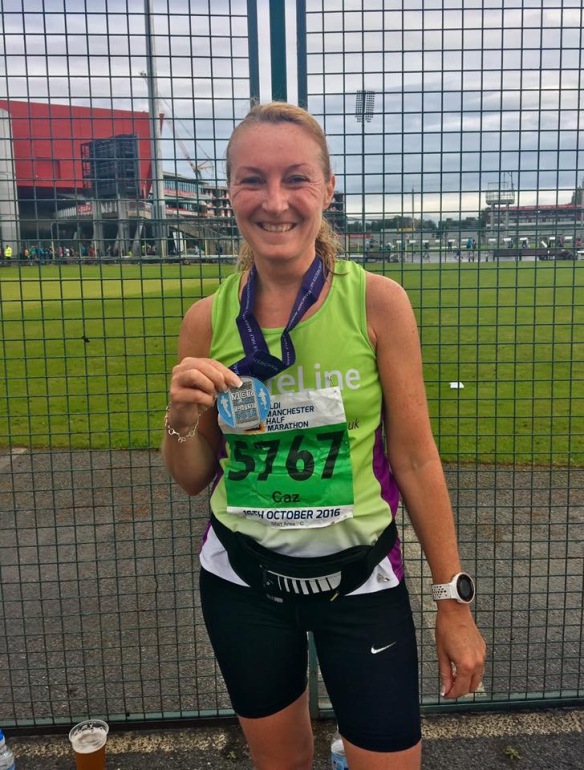 I felt strangely emotional to be part of the Harriers gang – although I would still never call myself a runner…but I can honestly say that without Harriers help especially Jacqui and Jayne, I would never have completed 11 half’s, a marathon and 6 other races so far this year as part of ensuring I complete my 16 in 16 for ABTA Lifeline. So roll on the last epic challenge 16 in the Benidorm half next month with some of the Harriers gang, work colleagues and friends, I can’t promise to race it (I know a cardinal sin ;( but I am likely to get over excited, emotional and talk a lot! – who me I hear you cry!) But… I can promise to truly enjoy it and who knows if Darren and Julie P have anything to do with it, I might have to keep up this running lark and renew my club membership in 2017 – having previously competed for my country in another sport, I knew I would enjoy the training and racing side but who knew that I actually would learn to love running along the way! So it’s off to Madrid on Thursday and yes I have already checked out whether there is a park run – does that mean I’m hooked? #NOWWERUN