What a difference a year makes. At the second Astley Park race of 2013, Jayne Taylor was the only lady Harrier to compete. Thirteen months on, and the Harriers ladies turned up en masse, fielding an impressive nine strong team. The lads boosted the number of Harriers taking part to 15, out of an entry field of 107 runners. Wherever you turned on the start line, there seemed to be a black and red vest; a point not lost on runners from several other clubs who complimented us on our turnout, and remarked how quickly the club seems to have grown. 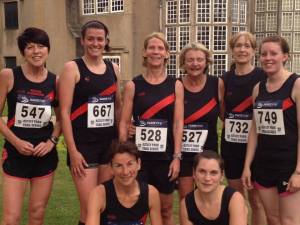 The ladies team, minus Shona
On to the race, and ladies first. Jayne Taylor demonstrated the virtues of eating meat by taking 20 sec off last month’s time, finishing in 29.11; 3rd lady overall and 1st V50. Jacqui Jones signed off from the V45 category in style, benefiting from her winter altitude training, to finish 2nd V45 in 31.34. The ever improving, and highly competitive, Caroline Rasburn took over 40 sec off last month’s time to cross the line in 33.53, and finish 2nd V50. Next lady in was Nina Fisher, who didn’t find the “hill” any easier this year than last. Her time of 34.33 made it a confidence boosting return though. Well done to Caroline and Nina for dropping to the ground after crossing the finishing line to demonstrate how hard they had run. Take note Mr. Millington!

Kelly-Anne Towns decided to treat herself to a leisurely pace, after completing the Windermere triathlon on the preceding Sunday. Her 34.49 was only 22 sec slower than last month, so watch out when she decides to race proper. Sarah Morton also decided to use the race as a training run, after recovering from another horse-related injury, and a Glastonbury weekend. She still managed a solid 37.34. Woman athlete of the year, Shona Taylor, has been dogged with an intermittent faulty knee. It flared up on the second lap, forcing her to a shuffling jog at times, but she battled on to finish in 39.09.
The real stars of the show though were Pauline Taylor and Pat Cole. Proudly wearing their newly acquired black and red vests, their pre-race aim was to complete the tough course without walking. They achieved this and crossed the line hand in hand, in a very respectable 46.17.

Despite being out-numbered, the lads turned in some decent performances too. First home was Gary Fitz. Having been sidelined with fallen arches, he returned to take 9th position in 26.29, over a minute faster than last year. Whatever he’s been doing whilst injured, he needs to share his secret. Next was Stevie Nick, who despite his seemingly erratic training methods, is always willing to race, and finished 11th in 27.21. The Caveman has also been laid low with illness, but didn’t use this as an excuse for not racing; actually, Becky was commissioning a new line in supporters’ tee-shirts, so he had to show up. He jogged round in a time (27.46) which most of us will never see at peak fitness. 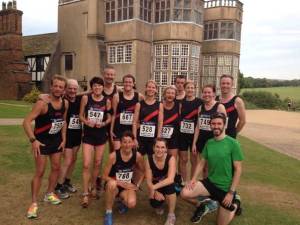 Returning from a tremendous 5K pb in Tenerifeeeee, Darren Jackson is now consistently running well, and he took 10 sec off last month’s time for 17th place in 28.11. Dave Collins also improved on last month’s effort to finish in 28.32, 2nd V50. Paul Bryers ran much of the race with a badly cut heel, but still managed to beat his previous time, coming over the line in 31.11. By the way, the cut heel received short shrift from Dave, so it’s not only Graham who he picks on!
The men’s efforts ensured that Harriers were first team and they duly awaited at the presentation for their award. The entry form had mentioned a prize for first men’s and ladies’ teams. Unfortunately, the prizes were “provisional” and “dependent upon the number of runners”, and with the organisers choosing to invoke their release clause, there was no free beer for the boys.
After the fantastic team spirit generated during the cross-country season and carried through to the relays, it was great to see that emerge again at Astley Park. Full marks to everyone who turned out, and keep wearing the vest!