It’s bargain bonanza time at Wigan Harriers with Half Year Memberships now up for grabs at a discounted £17.50! That will entitle you to 6 month full membership of the club and the right to wear the red and black vest and represent Harriers at race events. Join now and you will be in time to experience the mud, guts, glory and goose bumps of the cross country season, or the fabulous camaraderie of the upcoming road relay championships!

Membership also gains you a UKA competition license, money off all UKA races, discounted track entry and a host of money off options from the likes of Sweatshop. You will also gain access to the wealth of knowledge and personal advice available from our UKA qualified Leaders in Running Fitness and Coaches.

Download your form here and give it to Dave Collins of Jayne Taylor along with cheques made payable to Wigan Harriers:  NEW Membership Form 2014

Listen to your coach….yes that’s right, it is useful to listen occasionally! A few months ago I mentioned to Big Chief Waddy that a few of us were doing Freckleton, his one liner was “always hot and hard work”. Entries were already in place so the advice was ignored.

Freckleton took place on 22nd June and is run unusually in the afternoon at 2pm. This is so it fits in with church services celebrating the Village Club Sports Day.

In the run up to the race the forecasts were for 18/19 degrees and sunny intervals, slightly warm but manageable indeed I was pleased to see the weather looked settled.

Taking on the challenge were Mark Rogers, Daniel Atkinson and Mike Harris. Chatter in the car mainly revolved around PB’s and spirits were high. The morning cloud encouraged us all to believe we were going to have decent races.

The start and finish were on the sports field and there was a great atmosphere whilst everyone was milling around waiting to start, a varied mix of competitors. The morning clouds were by now rapidly disappearing and the temperatures were climbing.

The race starts with a loop of the village with plenty of supporters on hand for encouragement. Not surprisingly with this level of support the opening mile felt comfortable and I settled into a sub 6:30 pace. It didn’t take long for things to start getting harder. The heat was now building to a mid-afternoon high and I was mighty pleased to see the first drinks station. Prior to the race I had foolishly not given hydration much thought. My thinking was sub 90 minutes of running so no need to worry. It proved to be a school boy error. First mistake was not stopping to drink, I tried to manage a few gulps on the fly, choked and gave up. I should have taken a few seconds out to get some fluids on board. My second error was not thinking through the effects of heat and dehydration and moderating my pace and target.

The course is fairly level and is a mix of village roads, country lanes and pavement beside the main road. It’s pleasant without being memorable however on the 22nd June those gentle inclines seemed very hard and not flat as temperatures climbed to 23 degrees. 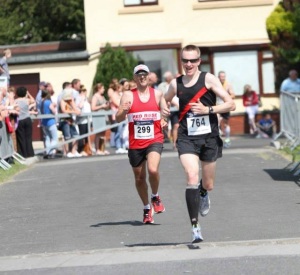 With my stubbornness to stop for a drink and a steady decline of pace, meant the race developed into a war of attrition with only one winner.

By ten miles I just wanted to go home so I kept running as the car was at the finish. Any chances of a PB were long gone, it was now just about pride. I overheard a spectactor comment to a friend how knackered I looked – thanks I thought, at least everyone can see the pain.

Mark was far more sensible, taking on drinks and running well until the 10 mile mark when a lack of longer training runs started to take it’s toll, coming home though in a great 14th place in a time of 1.21.07.

I had no idea how Mark and Daniel were doing as the course apart from the start is one big anti-clockwise loop so with half a mile to go it was good to see Mark cheering me home. I tried to rally, picking up the pace for a few strides but it was short lived and I trotted home in 1.34.54 mighty relieved to be finished in 68th place.

It was so busy near the finish I didn’t manage to find Mark. It was fabulous to see so many spectators. After a short wait Daniel emerged around the final bend deep in the zone and oblivious to the shouts of encouragement to finish in 1.52.25.

No PB’s gained but some important lessons learnt!

If anyone fancies doing an Olympic distance triathlon then this has got to be one of the best around.  (Well I can only compare it to one other but it was good).  Last Sunday I took part in the ‘return’ of Tri Windermere after a last minute cancellation the previous year.

I travelled up with the family the day before and was able to register on the Saturday evening, saving a bit of time in the morning.  Anything to give me an extra ten minutes in bed before the 7.30am start!  Depositing my bike at a friend’s motorhome right next to transition, off I went for an early night to our accommodation in Ambleside.  Which was right next door to the Lakeside Inn, complete with waterside seating and thriving with people enjoying the sunshine.  And wine.  Oh the wine.  I managed to abstain though and obeyed my 5.45am alarm after the obligatory nightmare about oversleeping and missing the start. END_OF_DOCUMENT_TOKEN_TO_BE_REPLACED

As the rest of the club were recovering from their heroics at Astley Park, 4 more Harriers donned the vest to put out a full mens team for the first of this years Sale Sizzlers. This super fast 5k course attracts some of the best runners in the north West with former Manchester Marathon winner Dave Norman spied warming up around the leafy pathways of Wythenshawe park before the race. END_OF_DOCUMENT_TOKEN_TO_BE_REPLACED

What a difference a year makes. At the second Astley Park race of 2013, Jayne Taylor was the only lady Harrier to compete. Thirteen months on, and the Harriers ladies turned up en masse, fielding an impressive nine strong team. The lads boosted the number of Harriers taking part to 15, out of an entry field of 107 runners. Wherever you turned on the start line, there seemed to be a black and red vest; a point not lost on runners from several other clubs who complimented us on our turnout, and remarked how quickly the club seems to have grown. END_OF_DOCUMENT_TOKEN_TO_BE_REPLACED