This was to be my second time around the challenging course of the Lakeland Trails 15k at Coniston, having finished last year in 1h 33m18s. This is, in my opinion, about the toughest of the Lakeland Trails series with a gruelling 4.5k of continuos climb almost from the start. Whilst I had designs on bettering my previous time, I hadn’t worked out any particular race plan based on prior knwoledge of the route. All I knew was that lactic threshold was sure to be pushed to the limit on the unrelenting ascent, and to run it fast meant it was going to hurt!

My own pre-race nerves were settled by the pre-occupation of supporting my wife in her very first race as she took on the 10k Trail race event. She was understandably a little daunted to be lining up with the fear of 6.2 unknown miles of trail ahead of her, but set off at a sensibly steady pace.

Her training best around the streets of Wigan had been around the 1h 20m mark. Given the roughness of the terrain and the fact that this was her first off road venture, we were hoping she would get somewhere near that time boosted by a bit of race adrenalin. When she re-emerged onto the school field at John Ruskin 1 hours and 10 minutes later we could hardly beleive it. Covered in mud, and still running hard she charged to the finish determined to hold her place from the runners challenging from behind. It was quite impressive to witness the moment a casual runner became a real racer! We’ll have a Harriers vest on her yet.

After congratulating Sandra it was time for a quick warm before I was toeing the line myself. I chose to place myself towards the front of pack based on my top 30 finishes in the last few races of the series. The importance of a decent start cant be underestimated, but when I found myself heading out of the school grounds in 3rd place I began to suspect I may have overdone it a little. I passed the family on the road into the village and mouthed the word “third” at them and shrugged my shoulders aopologetically – this wasnt going to last!

Amazingly enough I held my position through the village and felt like a real, elite runner to be applauded through by people who had no idea that I had no right to be so far up the field! I managed to maintain the fantasy until about 3 quarters of a mile into the climb when I dropped to 4th, and very shortly afterwards plumetted to 10th as the burn began.

The route winds its way up the broken concrete of the Miners Track where it then veers left and heads off up from the Coppermines valley under the shadow of Coniston Old Man. I had dropped further to about 15th place when I began to wonder if they had altered the route his year. We were veering off to the right of the cottages on a path I was sure headed over towards Weatherlam instead of the route I knew. When the guys in the lead suddenly came to a bewildered halt it became clear that the race had gone the wrong way. 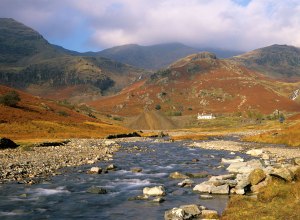 The route goes to the left of the hosue – I went right! (pic by keithwoodphotography.co.uk)

We all stood about confused for a moment or two before it dawned on us that this definitely was the wrong route. I can only assume it was due to a missing or misplaced marshal that should have been at the fork in the path. It was quad breakingly disheartening to have to run back down the hill and lose hard won altitude and end up at the back of the pack of runners who had seen the mistake and gone for the right route. When you are suffering on a tough run its too easy to find an excuse to back off  – I wasnt going to that happen so I mentally gave myself a slap and decided not to let it spoil my run.There were few opportunities to grab back the lost places and time over the next mile or so as the track narrows to a technical rocky stairway up the mountain. I did manage to make a few overtakes when the track opened up enough to get around the runner in fornt, but it wasn’t until we neared the top of the climb that things opened up enough to get some speed going and get past other runners.There were a few others around me who had been in that group that went the wrong way, and once we reached the fast descent towards Walna Scar car park the pace picked up and we settled down for some proper racing! I spent the next few miles swapping places with a chap in a white t-shirt, (from the results it was either Carl Cross or Craig Lammas). He had the legs on me on the flat, and edged it slightly on the uphill; I had the advantage on the descents and was able to haul him back and make a move ahead. 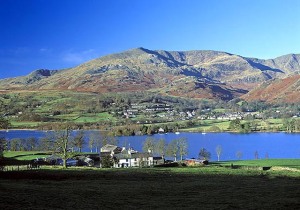 We continued like this for most of the race until I began the very fast descent towards Torver with about 2.5 miles to go. I chanced my luck on the broken rocky ground and hit full speed in true fell runner style, (ie one mis-step and its a trip to casualty again!). Once back on the tarac I gave it full whack to get enough of a gap to give me a chance of holding my lead to the finish. At this point I made the absoloute classic racing mistake and risked a glance over my shoulder to see how far behind my competitor was.He was to tell me afterwards that the glance backwards gave him the hope he needed and he knew in that moment that he could haul me back in. Oddly enough, as I looked back and we made eye contact I knew instinctively that I had just given him the race and could have kicked myself for such a basic mistake.

We both ignored the water station and plunged into a leg sapping and lung busting muddy field that will rival anything the cross country season has to offer this year. Calf deep mud seemed to suck the life out of legs that had been battered for miles of fast descending. The gap between me and the guy behind compressed as we both slogged through the mire…and then I fell! Nothing spectacular, just a weary stagger and a plop to my knees to cover me in muck. I got up and tudged on as Mr White Shirt caught and passed me .Fair play – he did give me a word of encouragement as he went by and gave me the impetus to pick up and chase him again.

Much to my surprise I found myself catching up as we headed into a wooded section of tree roots and tricky rock paths and a sudden descent. Once again my speed on the downhills paid off and I re-took my place. I did manage to say “see you in a minute” as I went past him though!

Path home along the lake, (pic by lakelandtrails.org)

The last mile and half of the race goes through a campsite and follows the shores of Lake Coniston itself. On such a crisp, bright day it was a glorious sight, but even the beauty of the lake and the majesty of the towering fells couldnt take my mind of the deep, aching weariness that was making its way up from my legs. This was the point in the race where the desire to pass the runner in front is matched by the creeping fear of being caught by the runner behind as the stamina begins to give out, and you are consumed with the wish just to finish and have it over with!  Me and the guy in white had passed a few other runners as we duked it out with eachother, but he had enough left to draft past me and slowly pull away on the long flat run back towards Coniston and the finish.Just outside the final run-in he reached a closed gate and had a panicked few moments as struggling to operate the latch and open the gate. Another runner we had caught managed to open it, by which time I had closed dramatically and was suddenly within reach again. It would have been totaly unjust to have taken the place thanks to a sticky gate, but he still had enough in his legs to consolidate the place and beat me on the last slog through the school field to the line. I made a move on the guy who had opened the gate to take one more place before the end, only to have him come flying past with a stunning sprint finish to the line!

I had a good chat with the guy in white as we agreed what a superb run it had been with us pushing eachother, and both of us wondering what could have been had we not all gone the wrong way near the start. My eventual tim was 1:20:23; over 13 minutes up on my best efforts of last year with which I have to be quite pleased! The talented Pete Lashley came home less than a minute later having had a blinding race, and was shortly followed by St Helens Strider Gary Spriggs. Perhaps my favourite part of these events came next with a couple of pints of Guiness sat in the sun watching Pete and his guitar play a full set, (after a run like that!). Highlight of the day though was winning a family cruise ticket round Coniston in the prize draw…which had nothing to do with the child pulling the numbers out of the box being my own daugher!, (well done kid!)