The Lakeland Trails series of events around the picturesque towns and villages of Cumbria aims not only to provide a racing opportunity for fell hardened veterans, but also to introduce Trail Running to those taking their first nervous steps into the world of off road running. It was at this same fixture last year that I first pinned a racing number to my vest and took to the fells of the Lake District. Much to my surprise I found that running in the hills wasn’t soley the preserve of superhuman fell runners or hardcore mountain runners. That day I amazed myself with a respectable 53rd place out of and couldn’t wait to sign up for the next one! 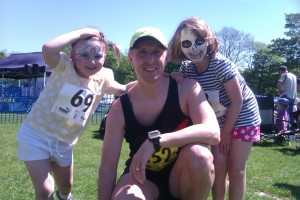 Guess who had the “wrinkly faced old man” design

This year the race was once again blessed with glorious sunshine which helped with the celebratory, festival feel these events alwsays seem to have. As sson as we arrived at Stavely Recreation ground my girls were looking out for the kids race regisrtation. With faces freshly painted they were soon tearing around the finishing field with the rest of the youngsters. My youngest has been listening carefully to Daddy bang on about running and racing, (I think she’s the only one still listening), and instead of haring off at a sprint and running out of steam, she paced herself over the distance and out ran her older sister for the first time. It cost me a pair of ice creams to re-establish peace!

If only I had listened to ny own advice. Inspired and patently over confident from my 26th place at Cartmel earlier in the series, I positioned myself optimistically near the front of the pack and took off like a jack rabbit at the start. Leaving the village I was in a ridiculously unrealistic 10th place and soon regretting it as we hit the first long climb along a paved roadway. When the road turned to a tricky, pot holed collection of loose stones heading out towards the fells, I suddenly started going backwards as a torrent of runners passed me.

A hearty greeting from Pete Lashley as he drifted easily past had me gasping out excuses as the lead in my legs slowed my pace yet further. For some reason I just couldnt get going and my legs got heavier as the excuses in my head came thicker and faster: a heavy couple of weeks training – or perhaps that marathon was still in my legs – or a simple lack of respect for the event biting me in the backside! By 2.5 miles I had just about “blown up” and consoled myself with the tought that I’d just trot round this one and enjoy the scenery. After the ultimate shame of walking the last 50 yards to the top of the first hill I latched on to another runner and got going again on the tricky technical descent.

The route then crossed a delicious looking River Kent, sparkling blue in the sunlight and crying out to sweaty runners to come dip their toes! I have trained along these paths many times, but never can I recall seeing the fells and the river looking quite so stunning as they did on Sunday.. nor quite so hot! Perhaps it was the familiarity of the terrain but I somehow managed to find a ryhtym along the grassy tracks heading for Kentmere village, and found myself slowly gaining on the group ahead. By the time we had climbed back on to the open fells I had regained half a dozen or so places and was finally moving at a decent pace.

From miles 6 to 8 I was more or less alone. I could see the first lady up ahead but knew I didnt have the legs to catch her, and a glance over my shoulder showed a healthy lead over those behind. On the firmer packed tracks over the tops I had a chance to lift my eyes from the terrain and take in the awesome views before I was suddenly surprised by the patter of approaching feet and two strong looking runners were upon me and past before I knew it. That gave me a wake up call and I latched onto them as we headed towards the final water station.

From this point the terrain changes to grassy fields as the ground rises steeper and steeper towards the summit of Reston Scar. Tired legs really begin to feel the effort of clambering over a couple of stiles and leaping the odd brook. Just before the very last climb up the “Sting in the Tail” I was over taken by a chap I later learned to be Gary Spriggs of St Helens Striders. It is typical of the nature of these events that even overtaking is a gentlemanly and polite affair. “Come on not far now” he offered by way of encouragement before politely taking my race place! 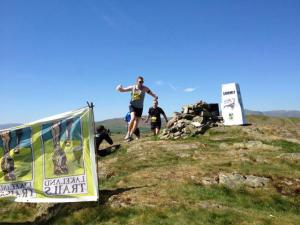 Top of the Sting

Last year the route then mercifully turned away from the true summit and plunged downwards towards Staveley and the fnish. This year the “Sting in the Tail” has been added, which is a 50 metere calf busting detour up a grassy incline to the very summit. Any sensible runner would adopt the tradditional fell runners hands on knees style walk up this section, which is probably why the organisers had a gaggle of photographers and a cow bell ringing mad man on the top exhorting us to run all the way! If you are going to walk you aren’t going to do it when there someone with a camera around!

The consolation on reaching the summit of any race route is the free-wheeling descent on the other side. Not today! The wind rushing over the top of the hill was so powerful it managed to momentarily win the battle with gravity. It took a concerted effort to make any progress downhill! I was soon huirtling with abnadon down the zig-zagging path back to the village, with a quick glance over my shoulder showing a big enough gap on the runner behind to feel relatively sure of my place.

On the final stretched along the river bank I was also making up some ground on my St Helens Strider pal, but I knew there wasnt enough left in the tank to make up what turned out to be a 10 second gap in the end. As he said to me afterwards, it was to be yet another victor for Saints over Wigan this year! Instead I settled for playing to the crowd on the last lap round the field, raising my fist and finishing like I’d won it! (you got to grab your moments!).

Free Ice Bath in the River

10 minutes later and I was sat in the River Kent with a gaggle of cramp afflicted runners letting the cool waters provided blissful relief! This has got to be the most heavenly of post run ice baths I’ve ever had!

Usually the end of the race signifies the end of the day, but the Lakeland Trails are different. After a chance to recover a bit, Pete Lashley re-appeared with his guitar and completed the festival feel with an outdoor gig as we all stretch back in the sunshine taking advanatge of the bar! The organisers go to some trouble to extend the prize giving beyond those talented enough to place well, and run a lengthy and entertaining prize draw based on race numbers.

Whatever the race result the Lakeland Trails always end up being a belting family day out all round. So it doesnt really matter where I finally finished. Days like these remind me of the joy to be had from running irrespective of race results and PB times: the camaraderie, the freedom from the clock, the fun, the challenge and the beauty of the surroundings alone make it a great experience. So… it didnt really matter where I finished…… even though I was punching the air and skipping half the way home once I’d discovered I’d come home in 28th place!