The 2012 Mid Lancs League Cross Country Awards were held at Bamber Bridge Catholic Club on Friday 13th April, on what turned out to be an auspicious date for Wigan Harriers. A long and hard season of mud sweat and goosebumps was celebrated by good turn out of mid lancs clubs who enjoyed a splendid buffet before the Mistress of Ceremonies got things under way.

First to collect a shiny thing were the Ladies Team who collected their well deserved silver medals for securing runners up spot and promotion for the club from Division 3. The ladies recorded two outright victories on the way, and were only pipped to top spot by just a single point from a strong Liverpool Pembroke and Sefton team.

The Ladies Vet 35 Team were then called up to receive a second round of silver medals for their fabulous 2nd place overall. They were only denied gold due to the perfect quartet of victories and maximum points recorded by Accrington Road Runners.

Next up were Wigan Harriers Senior Men who were presented with gold medals and the championship shield following their outright victory in Division 4. This hefty trophy now sports a Wigan Harriers badge for the first time thanks to a 1 point victory over Preston B’. Wigan Harriers will now move up a division to compete in Division 3 next season. 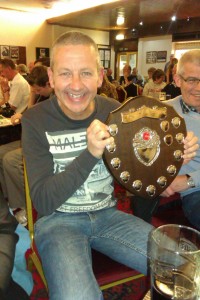